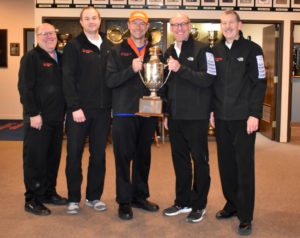 The Club National Championships began in 2005 and was established to determine the top teams from each region. This year, since only one women’s team registered for the playdowns, Team Gaum from Chicago Curling Club will automictically be sent to nationals as the MCA representatives. Team members include Sara Gaum, Kelly Zahn, Kailey Meyer, and Eleftheria Loughlin.

We look forward to cheering on Team Wright and Team Gaum at the Club National Championships! Thanks to all the teams and spectators who attended the men’s club playdowns. Thanks to Chicago Curling Club for hosting the event. Also, we want to extend our gratitude to Tracy Lawless for officiating the event and to all the volunteers who helped as timers during the competition.